Three Things I Learnt About Trees

At Wolfgang Essentials 2017 Al talked to a room of marketers ad business owners about trees. This was one of the first times we spoke publicly about our plans for Wolfgang Forestry.

Take a look at the the talk below.

So, this is the final talk.

So first thing I learned about trees is Ireland actually grows trees better and faster than any other country on Earth. Scandinavia is very famous for its wood. There’s trees that take 160 years to mature there, take 40 here. Okay. So if any of you’ve ever studied economics or international trade, you’ll be familiar with the term ‘comparative advantage’. Um, so this is that, in spades. So when I learned this, I’m the entrepreneur in me was excited and I said, Geez, I really need to plant some trees.

Ireland is the least forested country in Europe

The second thing I learned about trees is despite what you’d think, despite our natural advantage, we’re actually the least forested country in Europe. So millennia ago we were coast to coast forests. Now we’re at 10% coverage. So this is um, you know, the most reviled man in Irish history. Oliver Cromwell would have deforested Ireland in trying to get people to Hell or to Connaught but also the British, fair play to them, understood the strength of a comparative advantage and they deforested Wicklow for its Oak to build the British Navy, which conquered the Earth. So you could infer that the British empire was built on Irish oak. So given this and our kind of our, our, you know, maybe stolen heritage, the Irish man in me was enlivened and I thought Geez, I really need to plant some trees. And then the third thing I learned about trees is: forests are the Earth’s lungs. Okay.

So there’s this massive problem facing us. Excess of carbon in the atmosphere leading to global warming. And it seems like something we’re all waiting for somebody else to solve. Somebody else, other people at the moment who seem to be turning their back on it. 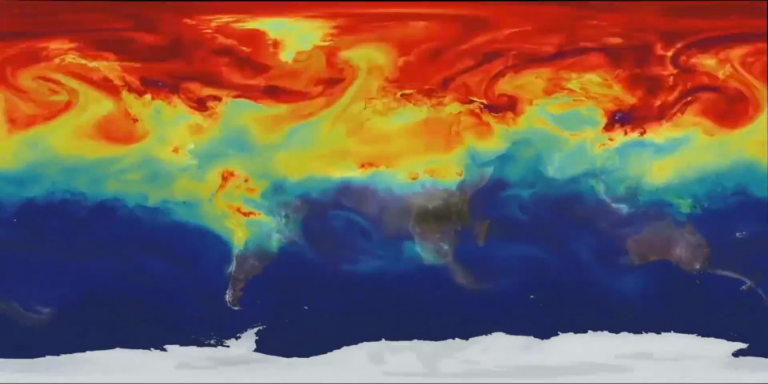 Forests are the lungs of the earth

But what I learned is that there’s actually a really straightforward solution to this. So let me show you a video to illustrate exactly this. So this is a video of Earth taken from space, the yellow and the red there you’re seeing as carbon in the atmosphere.

So it’s spring time now. As we get closer to summer, leaves come out and you can see the carbon is literally being drank from the atmosphere.

And then as we move to autumn, leaves start falling off and the carbon emerges again. So forests are the earth’s lungs, trees are the trachea and branches are the bronchi and there’s a really straightforward solution to this massive problem we’re all facing.

And if any of you in the audience are into meditation, this bit will blow your mind. You just saw the earth breathe. So one year is one breath for planet earth, an inhale and an exhale. 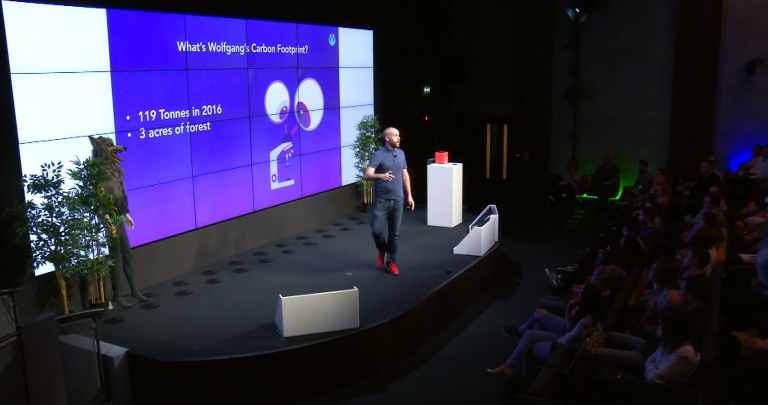 You know, we love doing a calc, and we figured out, fair play to Katie. Katie did the sums and we figured out that we pumped out 119 tons of carbon in 2016 and all of a sudden you’re like, wow, that’s a really big number.

So we did some further research and we said, well, how many, how many trees do we need to plant to drink that backup? And we found that if we planted 3 acres of forest in, in becoming matured, that would drink all of that carbon.

So we figured if every year we do this calc, and plant a bit more, we don’t just become carbon neutral, we’ve become carbon negative. And isn’t that a wonderful thing for us and for everybody to do. So the power doesn’t rest with people who are turning their back on this.

Right now the power rests with all of us, perhaps to take control

So I went to the team and Wolfgang, like lots of your companies, we do a quarterly charity thing, kind of voted on by the staff. And I said to them, and you know, every kind of three months we give it to something, but how about a committed sustained effort to this? How about we become forest foresters and it was a landslide and we’re doing it. 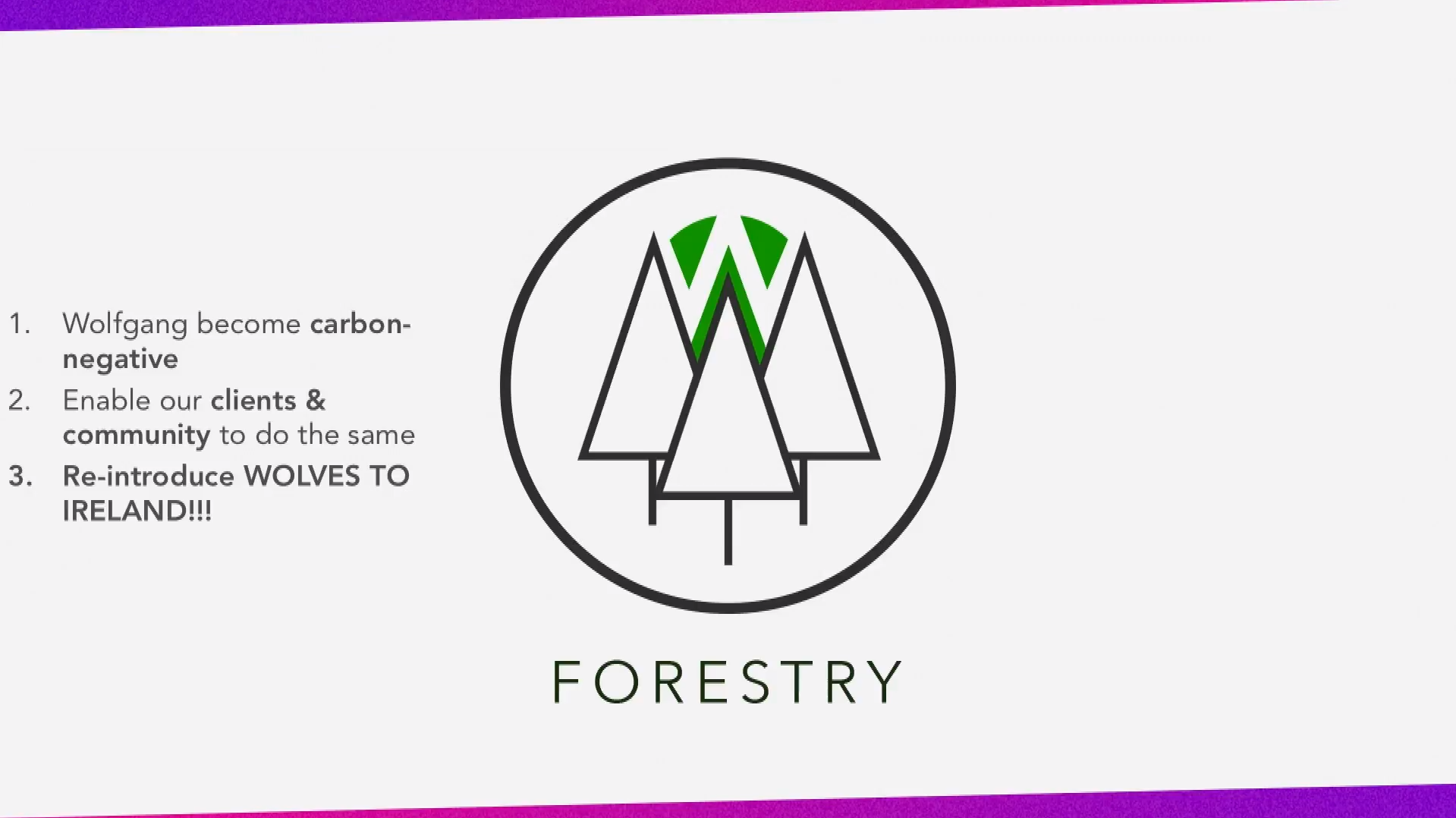 So where we are now is we’re shopping, I’m going out to see this place in a couple of weeks. That’s 8 acres right there. So that would do our 2016 on our 2017 emissions and some. And there’s some forest there, which actually like that gives a great ecosystem for, for that to grow.

So there’s 3 kind of levels of the mission for Wolfgang Forestry.

So level 1 is we want Wolfgang Digital to become carbon negative.

Level 2 is we want to enable our clients and community to do the same if, if they’re so inclined. So we’re in the process of setting up a Wolfgang charity as a not for profit.

And then level 3, I shit you not, once we have enough trees, we want to reintroduce wolves to Ireland!

And please don’t tweet that one, ’cause the agricultural body would be all over us. They wouldn’t be fans of that.

So thanks a million. Those of you who donated. I really appreciate it ’cause you didn’t have a clue what you were giving money to when you were signing up. And I said you know there’s an optional donation for Wolfgang Forestry. That’s what it is.

And more of you have come and said we’re doing a run, can you sponsor us? We’re not going to do anything just yet until we actually have the not for profit status.

There was a father Ted reference earlier cause right now your donations actually are just resting in our account so we won’t take any more of them til we’ve properly got everything set up, you know, and it’s, and that’s all legit. But those donations you did make, they will go into us buying a plot of land and we’ll invite you to come plant it with us, when that happens. So thank you very much. 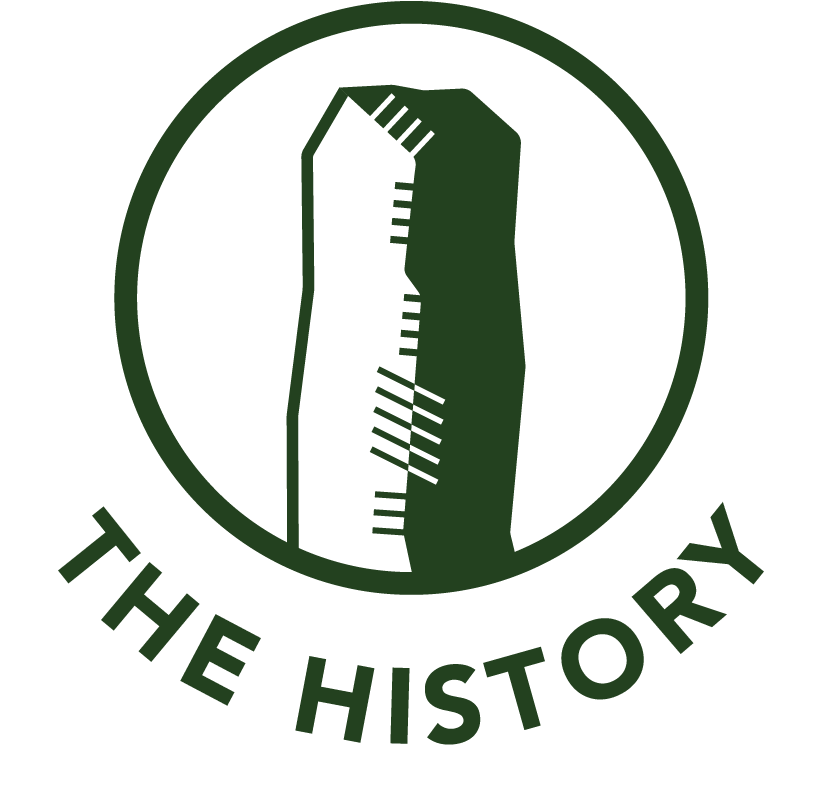